Osteopathy was developed by Dr Andrew Taylor Still a medical physician and surgeon who became disenchanted with the limitations of conventional medicine and wanted to develop an approach that looked at the whole person and treated them with a new method of treatment that focused on manipulation of the body’s soft tissue and bony articulations. Osteopathy is based on the principle that the general health of an individual is directly dependent on their skeletal system, muscles, ligaments and soft tissue structures functioning correctly together. The objective of Osteopathic treatment is to assist the body to heal itself, without resort to drugs or surgery. Osteopathy started out as a wholly independent health profession but was incorporated into the medical profession very early on in the US. The big difference is between Osteopaths trained in the US who use drugs, surgery and osteopathic manipulation and those Osteopaths trained outside the US who are not physicians and are limited to non-invasive manual therapies, such as massage, nutritional, postural and other general health advice. There are currently about 11 Osteopathic courses that are recognized by the GOC (General Osteopathic Council in the UK registration body). Neither Osteopathy or Chiropractic are universally available on the NHS in the UK.

Chiropractic was discovered by Dr Daniel David Palmer in 1885 when he moved the bones in the thoracic spine of his deaf cleaner Harvey Lillard, restoring the man’s hearing. The profession of Chiropractic was founded on the principle that a vertebra or bone (vertebra) that is misaligned out of position putting pressure on a nerve can cause disease. This principle has been modified and improved over the years as science have developed the profession, however the basic tenant that one’s nervous system controls every function of the human body has been proved by science, and there is little doubt that pressure on a nerve causes dysfunction and pain!

Most patients consult a Chiropractor with pain, however when the Chiropractor examines the patient, they are examining the whole person to assess the condition of the patients posture, musculoskeletal system and general health both structurally and functionally and to assess how this is impacting the patients nervous system, resulting in the pain that caused the patient to make the appointment in the first instance.

An example of this relationship would be since the nervous system controls every function in the human body, the problem that produces lower back pain often affects the nerves that control the bowel, this can result in constipation. So the Chiropractic treatment of the affected level for the lower back pain, not only resolves the back pain but may also directly improve the patient’s constipation.

The Chiropractors interest is not limited just to the spine but includes all other joints of the body and how they affect the patient’s health.  Chiropractors often utilize x-ray, other imaging and postural scanning technology to assess their patient’s health. Imaging helps the Chiropractor identify the level of the problem and whether or not there are any contraindications to treatment which indicate onward referral to another health practitioner. The above is consistent with the practice of your Chiropractor York. 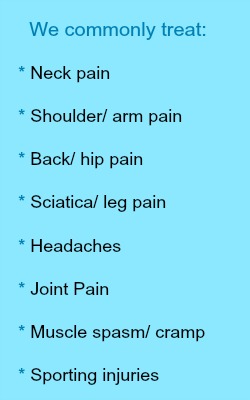